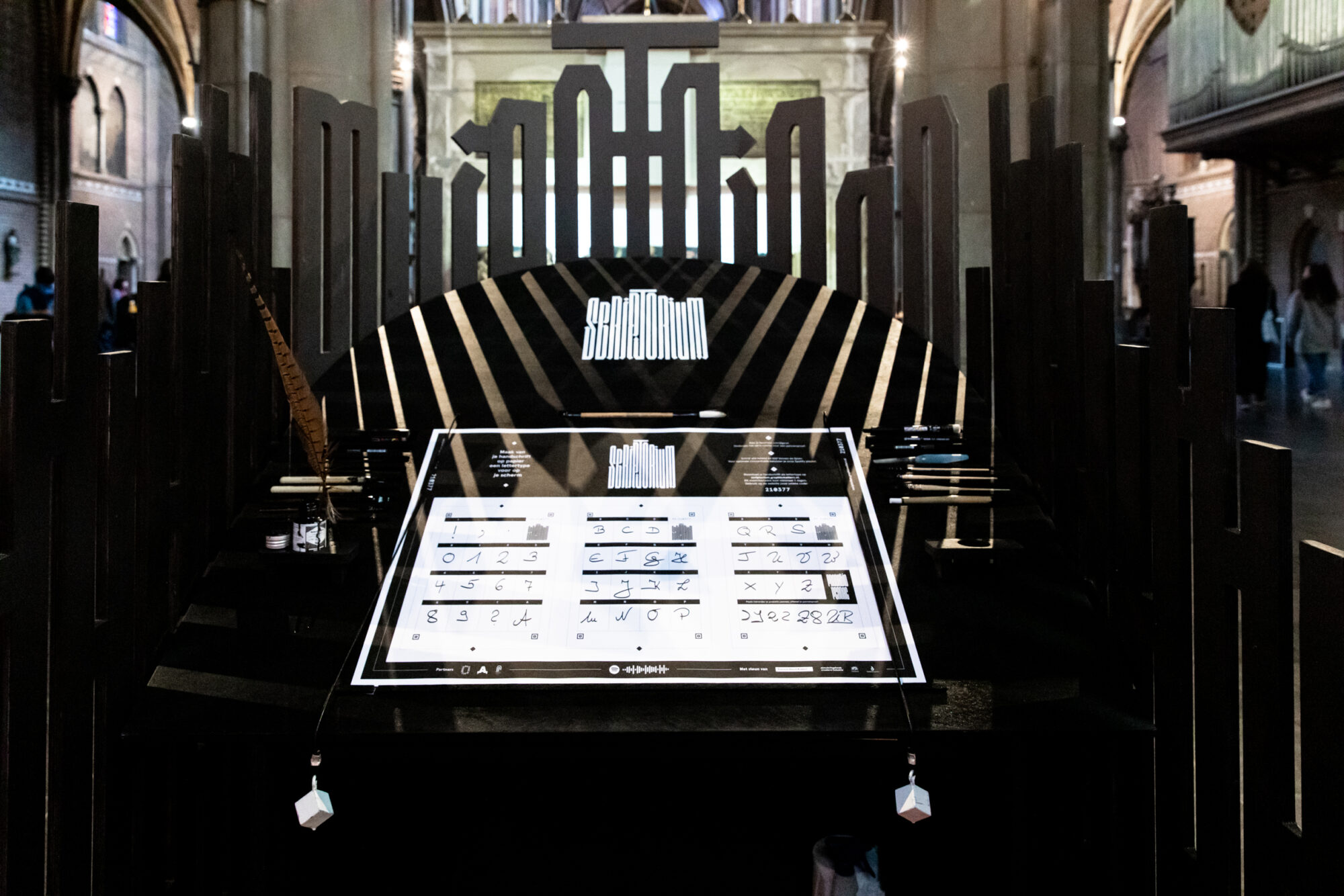 Monk’s work
We don’t often stop to think about the origin of the letters, signs and symbols we use every day. Centuries ago, medieval monks were responsible for the availability and distribution of knowledge by copying books by hand at scriptoria.To make texts easier to read, they developed manuscripts and punctuation marks. They used illustrations to make texts easier to understand. This ‘monk’s work’ is the cradle of most modern forms of writing and illustration. Nowadays, graphic designers take care of this particular job.

From a passion for this shared history, Graphic Matters came up with an interactive installation that allows people to experience the origin and value of (hand)writing. A project that, just like the monks, dedicates itself to the less fortunate in our society.

Design studio Autobahn dove into the history of writing, calligraphy, scriptoria and writing tables. “Autobahn typically works from materiality. Especially with an installation like this, you have to think about that. I like making letters, which you would normally see on paper or on a screen, tangible by translating them into a spatial object”, says Rob Stolte of Autobahn.

“I like making letters, which you would normally see on paper or on a screen, tangible by translating them into a spatial object””
– Rob Stolte, Autobahn 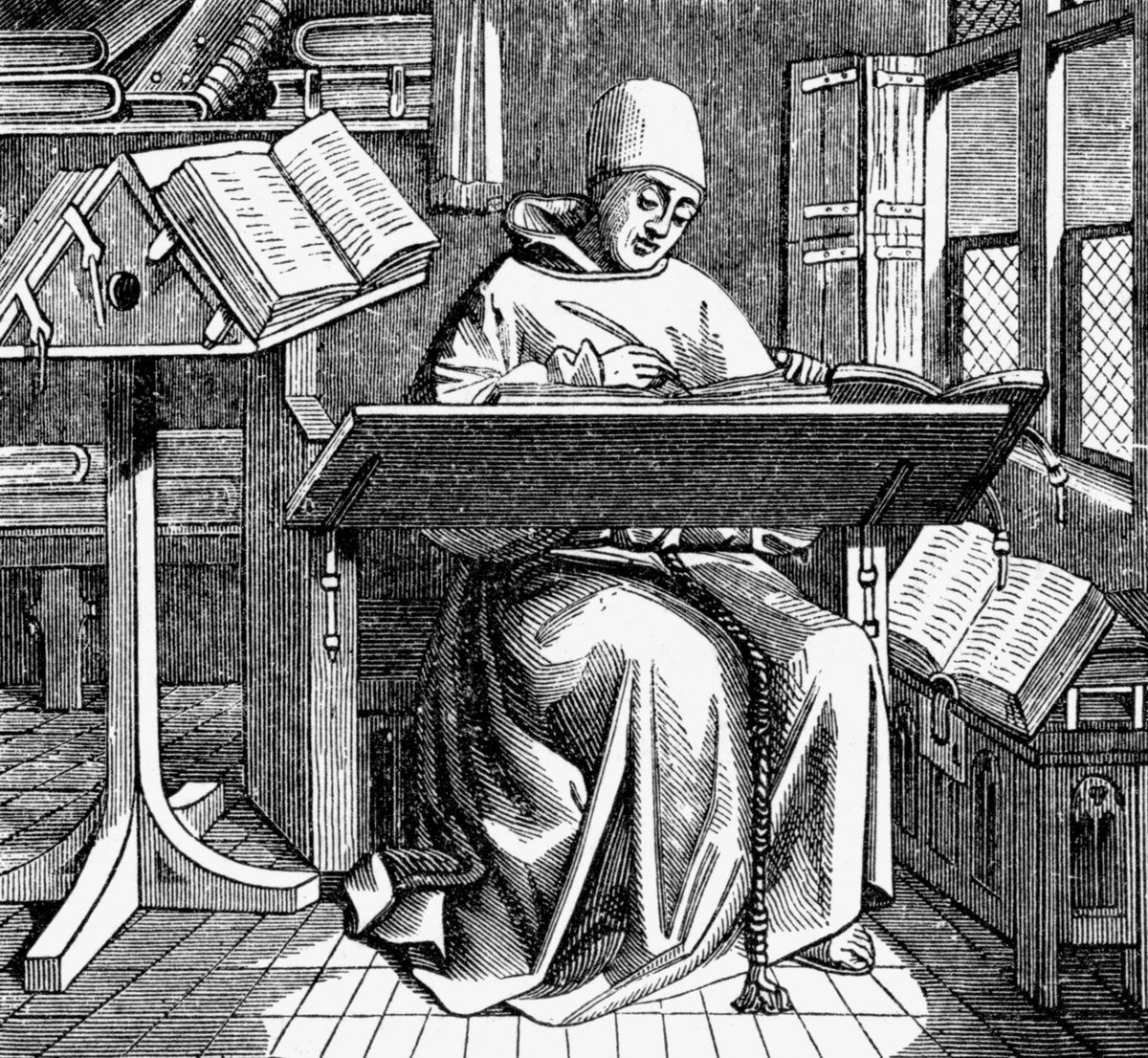 Visual research by Autobahn | Image: a monk working at a scriptorium

From design to spacial object
A piece of furniture was designed incorporating the word ‘SCRIPTORIUM’. Medieval fractal letters, long with little space in between, served as inspiration. Rob: “I created a design that provides a sense of privacy when you sit at the Scriptorium. Because you can look through it, you stay aware of your surroundings.”

Carpenter Marc Spaapen translated the Autobahn design into a spatial object. To do this, he used a computer-controlled CNC milling cutter to produce the letterforms in black MDF: a light material that ensures the installation can be assembled and disassembled quickly, and is compact for transport. 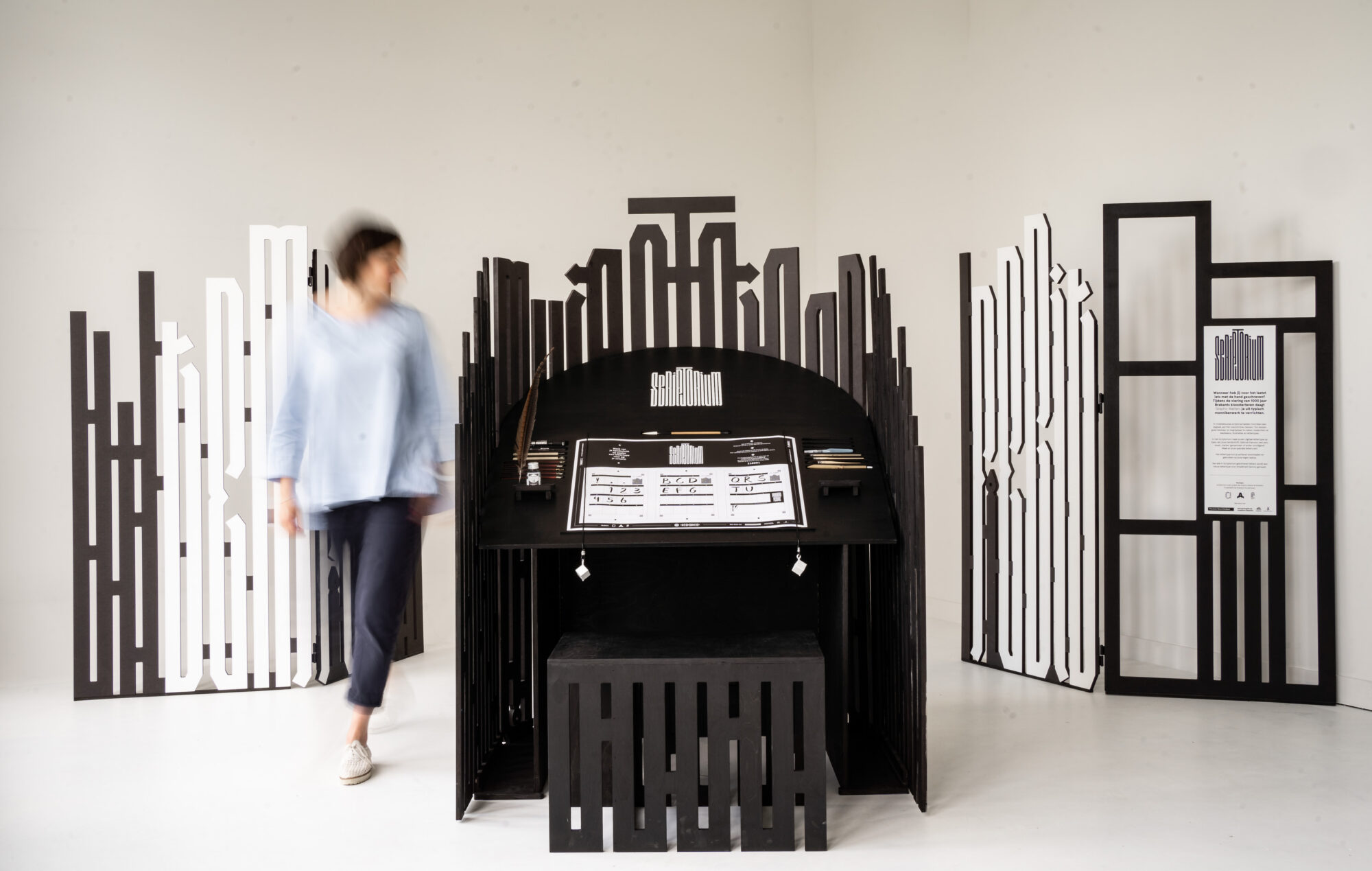 A ‘handwritten’ schoolreport
From August to November 2021, the travelling Scriptorium collected a thousand manuscripts. In monasteries, libraries and during events such as Dutch Design Week, participants of all ages and backgrounds donated their handwriting. This triggered all kinds of stories and reactions.

A man walked into Huis 73 in ‘s-Hertogenbosch with extensive letter studies that he had prepared at home. At Berne Bookshop, a whole school class came to visit. In Eindhoven, thousands of visitors admired Scriptorium in the Sint Catharina church during Dutch Design Week. And there was a group of students who wanted to hand in their assignments in their own digital handwriting. What would their teacher think of that? 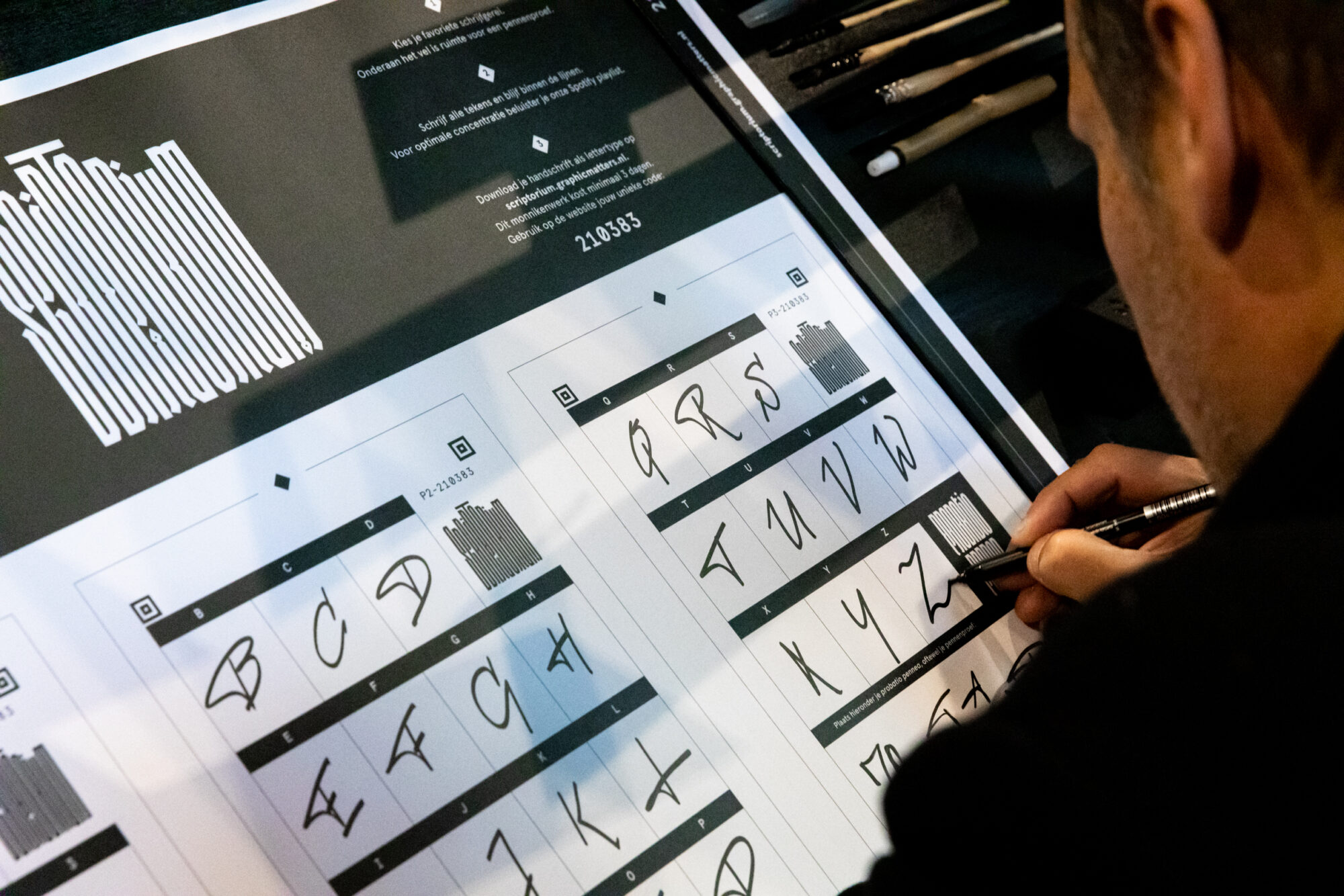 Each participant left 26 letters, 10 numbers and 4 punctuation marks on specially coded sheets. Participants could choose from different writing materials, adding character to the manuscript. Thanks to an automatic process developed by Handpicked agencies, each collected manuscript was converted into a digital font. By using a personal code, participants were able to download the font from the Scriptorium website and use it for text editing or web design.

Manus Brabantiae
The collected manuscripts were used by Autobahn to design the typeface ‘Manus Brabantiae’. This was no easy task, because how does one make a new unambiguous typeface from a thousand manuscripts? The manuscripts were first divided into five types; expressive, childlike, lower case, capital and incomplete. Then Handpicked agencies once again lent a helping hand. By calculating the centre line for each character, a uniform starting point for all characters was created.

Autobahn then manually superimposed all lower case and capital characters, and the average was determined. Not surprisingly, this average letter looked very much like a teacher’s handwriting. After all, it was the monks who developed our writing education. Despite the fact that we write by hand much less, this way of writing still prevails. Although some people deviate from it considerably. The final artistic stroke in the development of Manus Brabantiae was made by linking this average script to the three pens most commonly used in the installation: the crown pen, the marker and the five-line pen. This created a typeface in 3 weights. 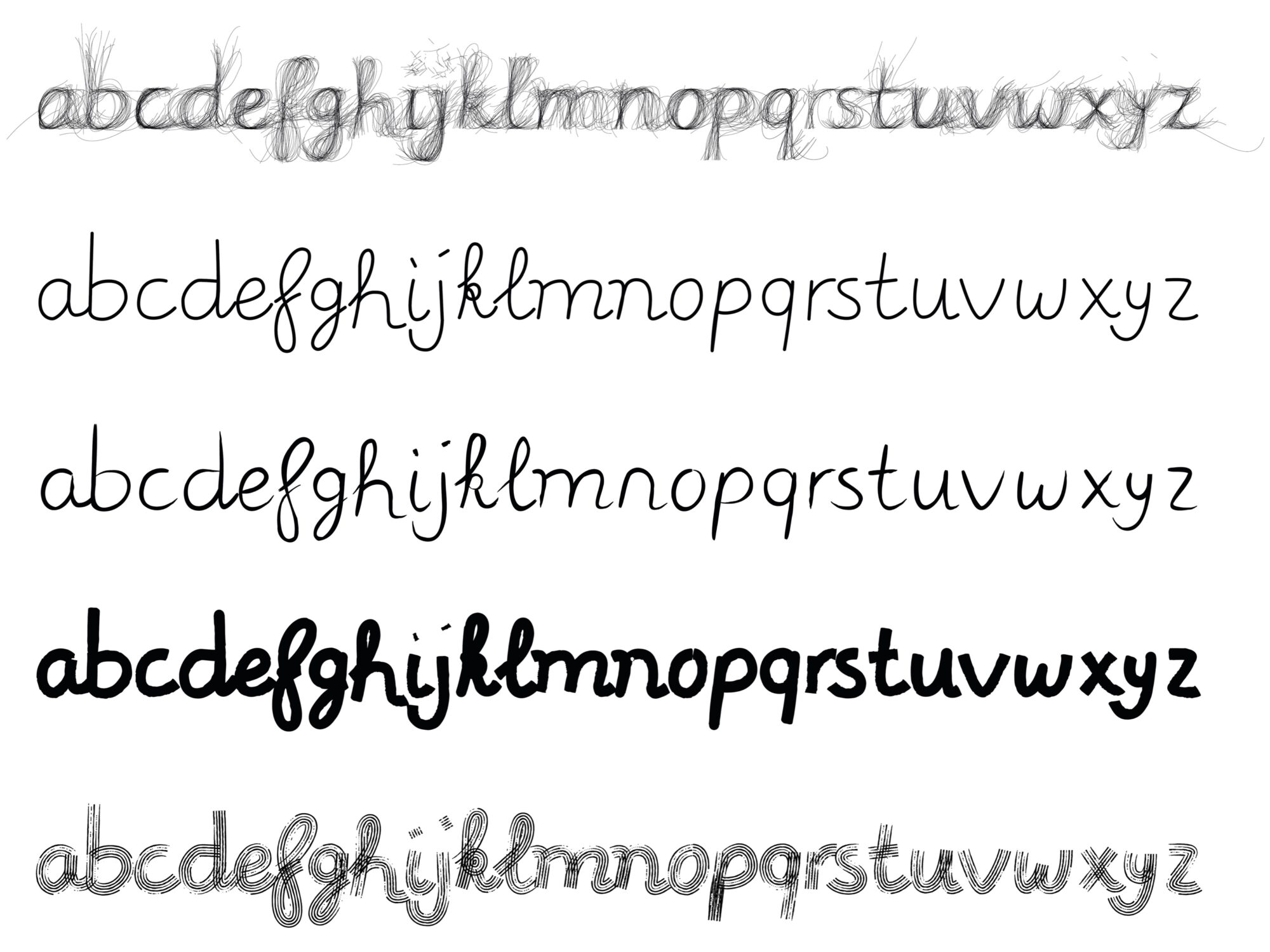 Straatkrant Sammy
But how is this project committed to the less fortunate? Autobahn collaborated with the South-Netherlands street paper ‘Sammy‘. This monthly magazine has a distinctive design that has been given even more character with the addition of the font. From April 2021, Manus Brabantiae will be used exclusively for streamers (quotes for interviews) in Sammy. This way, it gives interviewees their own voice.

Connection on multiple levels
In this project, heritage, design, language and technology come together thanks to cooperation with various local companies. The added value of the project is the connection that takes place on different levels. Connection with yourself, through a contemplative moment in which you are consciously engaged with your own creativity. Connection with others by combining letters via a computer script. But also connection through the stories of participants. For example, a German lady asked whether the handwriting of her deceased father could be digitalised, children developed their own cipher, students typed papers in their own handwriting, and there was a woman who now types her monthly handwritten letters to her mother without losing the personal touch.

Manus Brabantiae typed in crown pen. These are the first words ever written in Dutch. This happened around 1075 by a monk in a monastery in Kent (England). It means ‘all birds have started nests, except you and me; what are we waiting for?

IN COLLABORATION WITH
Brabants Kloosterleven