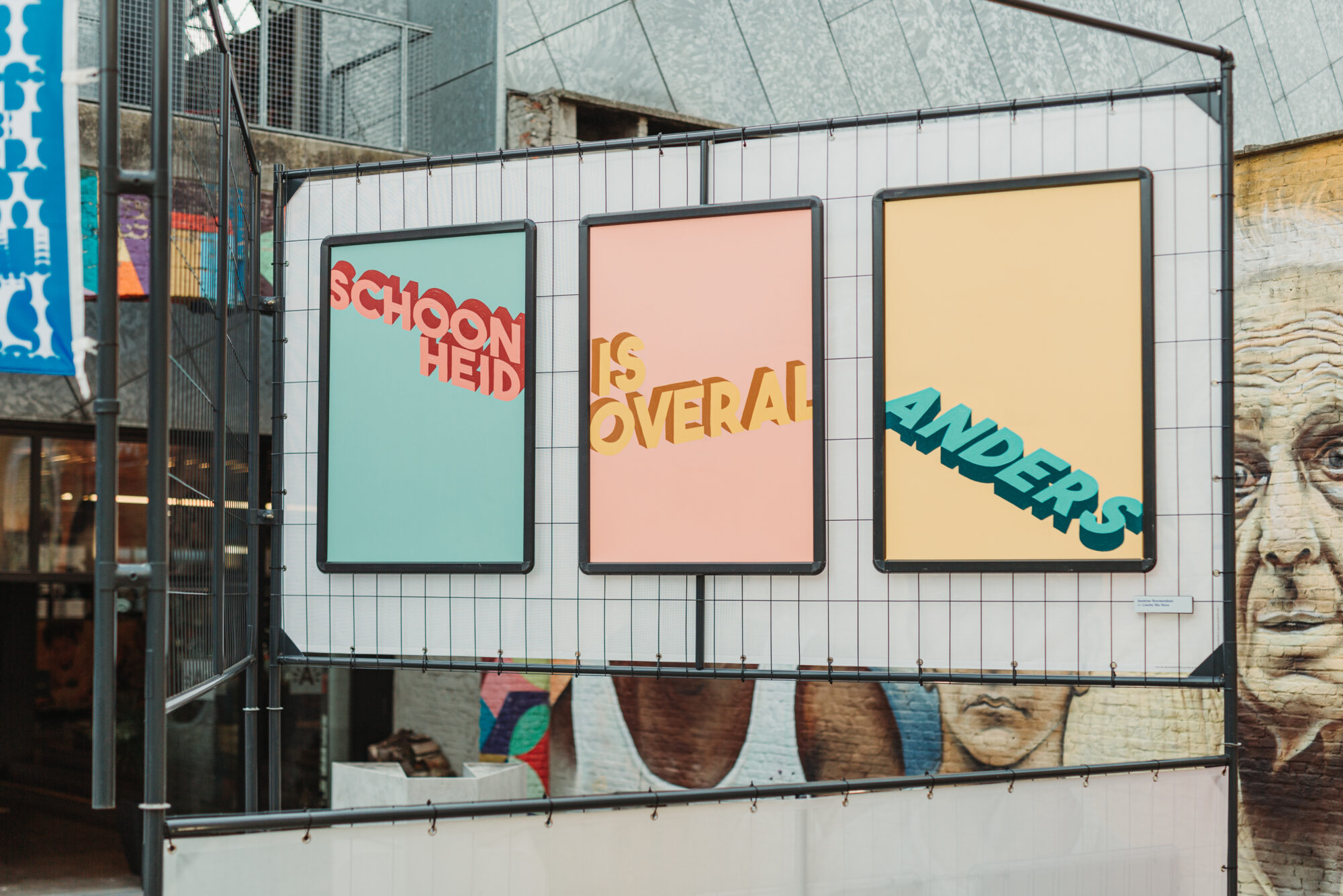 This year (2021), ‘Bezette Stad’ celebrates its hundredth birthday. According to some, the first multidisciplinary artwork in the world.

In collaboration with literary platform Watershed we’re celebrating the occasion with TYYYPOëzie.

Five wordsmiths and five designers meet at the cutting edge of language and typography and in pairs, create experimental visual poems about the modern city. Together the artworks make up a travelling installation that will land at various locations in the Netherlands and Flanders. Check out all locations here. 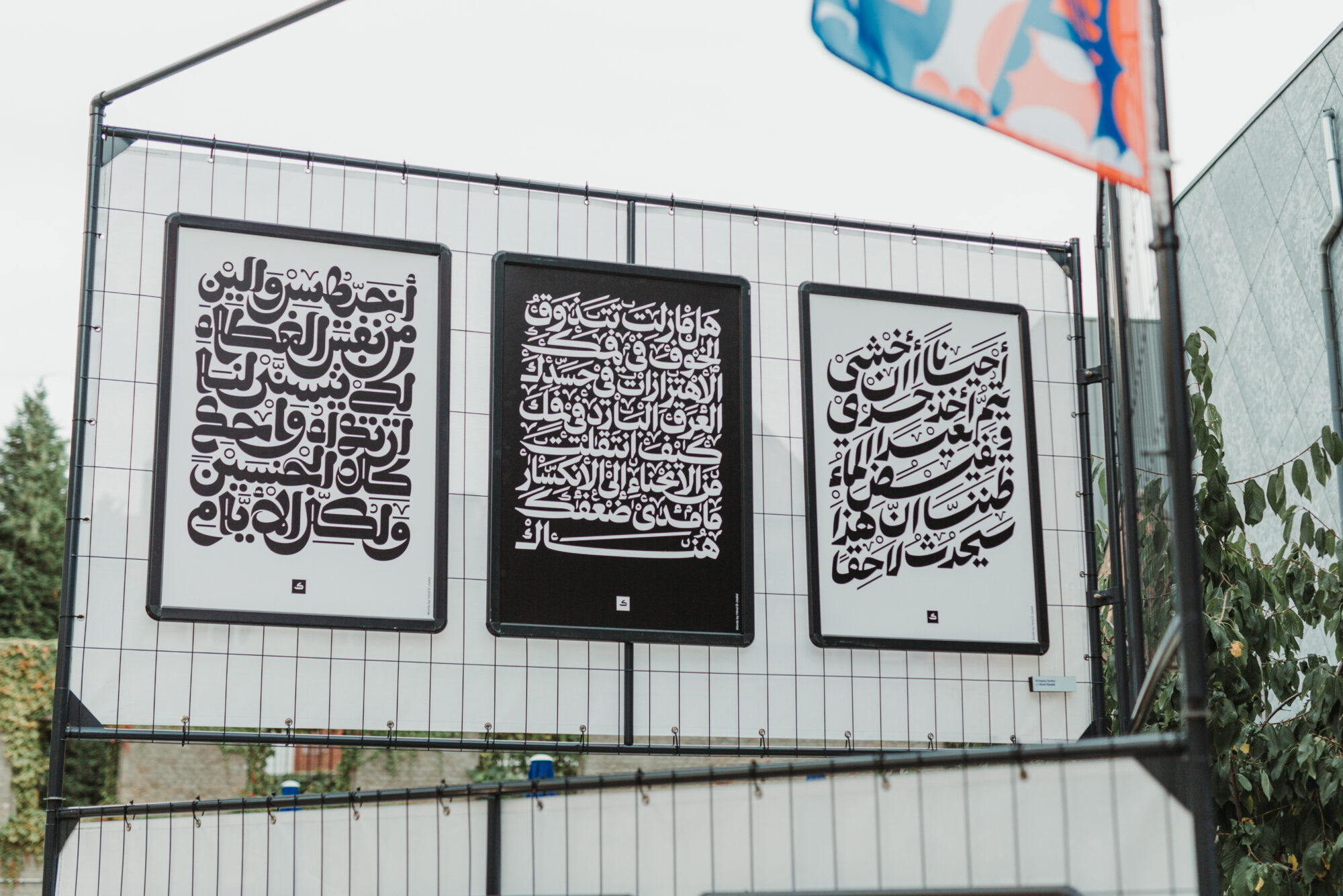 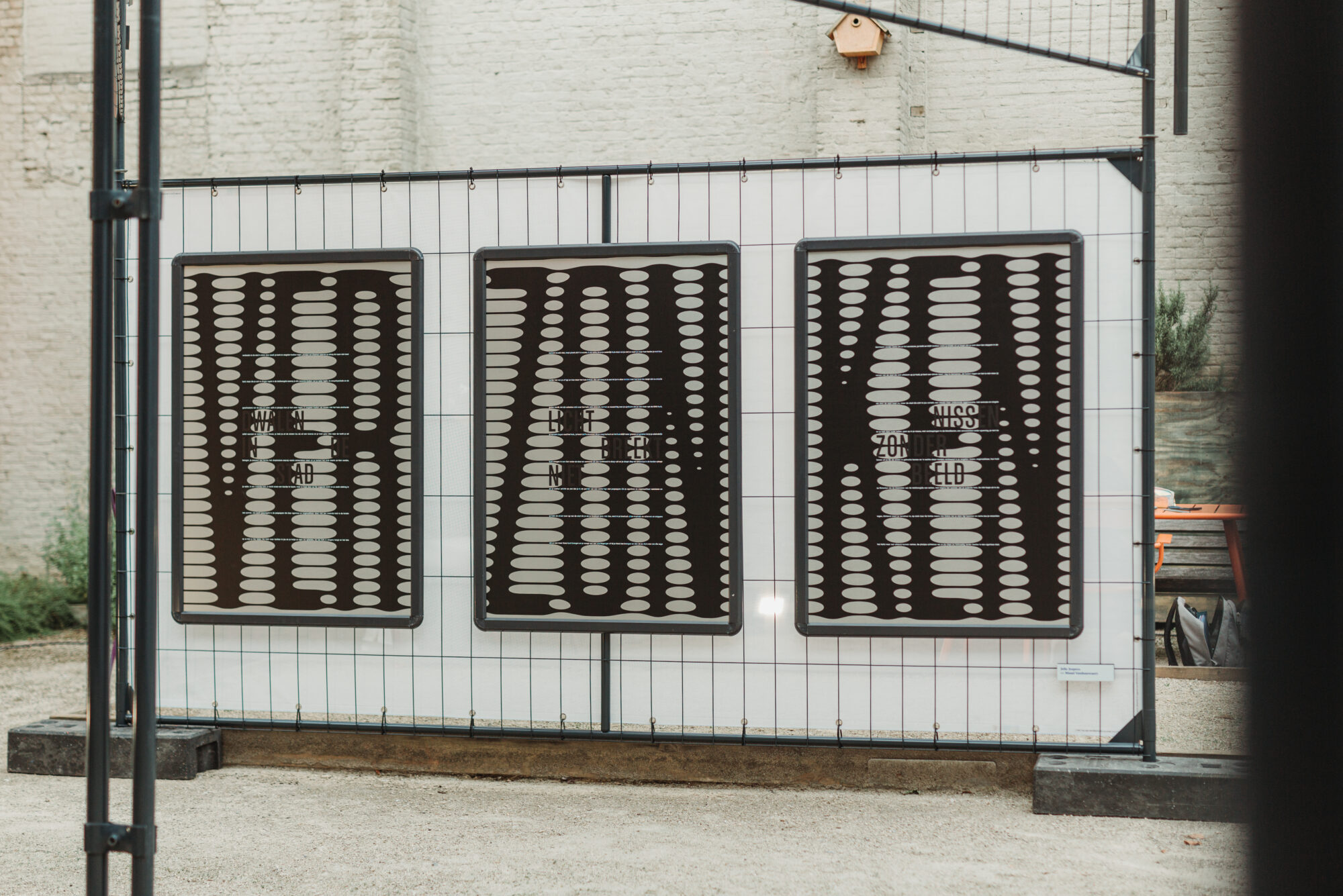 Stan van Herpen, Watershed: “I was fourteen years old when I first spotted Bezette Stad in my local library. It was an eyeopener. I had never seen anything like it. It was peculiar, experimental, but you could also interpret it however you wanted to. The fascination for this book and the love for Van Ostaijen’s work have never left me.”

Dennis Elbers, Graphic Matters: “Twenty-five years ago I first saw the ‘rhythmic typography’ of Bezette Stad during a Dutch literature class. I couldn’t forget about it and it sparked by interest in typography. The modern poetry collections I saw after that, were boring typographically and didn’t encourage me to read them. Although a connection between writers and typographers seems obvious, in reality they don’t often work together. It’s time to inspire people by having wordsmiths and typographers experiment together.”

Jonathan Griffioen (Amsterdam) – Jonathan Griffioen had his big break in 2018 with his poetry collection ‘ Gedichten met een Mazda 626’. In his poetry, he shows a strong fascination for his own urban environment , through authentic visual use of language. Just like Van Ostaijen he’s fascinated by sound poems, etymology and typology.Lisette Ma Neza (Brussel/Breda) – Lisette Ma Neza grew up in Breda, but now lives in Brussels. As a slam poet she is known for her soft voice, cystal clear message and excellent performance. She’s engaged, rhythmic and impassioned. This multidisciplinary artist was once described as a poetic carrier pigeon.Maud Vanhauwaert (Veurne/Antwerpen) – Maud Vanhauwaert is a multidisciplinary supertalent; successful writer, musician, comedian. As city poet of Antwerp she knows Van Ostaijen’s city like the back of her hand. She’s won many awards, including the Jan Campert-award in 2020 for her monumental book ‘Het stad in mij’.

Hind Eljadid (Antwerpen) – Hind Eljadid is currently in the midst of a victory march along Dutch and Belgian slam poet venues. Virtually every year, she wins awards with her powerful and resonant social criticism. Early 2021 her debut ‘Kruimeldief’ was published. For the occasion her work was translated to Arabic.

Joost Oomen (IJsbrechtum) – Joost Oomen is funny, unparalleled and imaginative. A polymath that expresses himself on paper just as easily as he does behind a microphone. He published the poetry collections ‘Vliegenierswonden’ and ‘De Stort’. Late 2020 his debut novel ‘Het Perenlied’ was published. De Volkskrant named him literary talent of 2021. 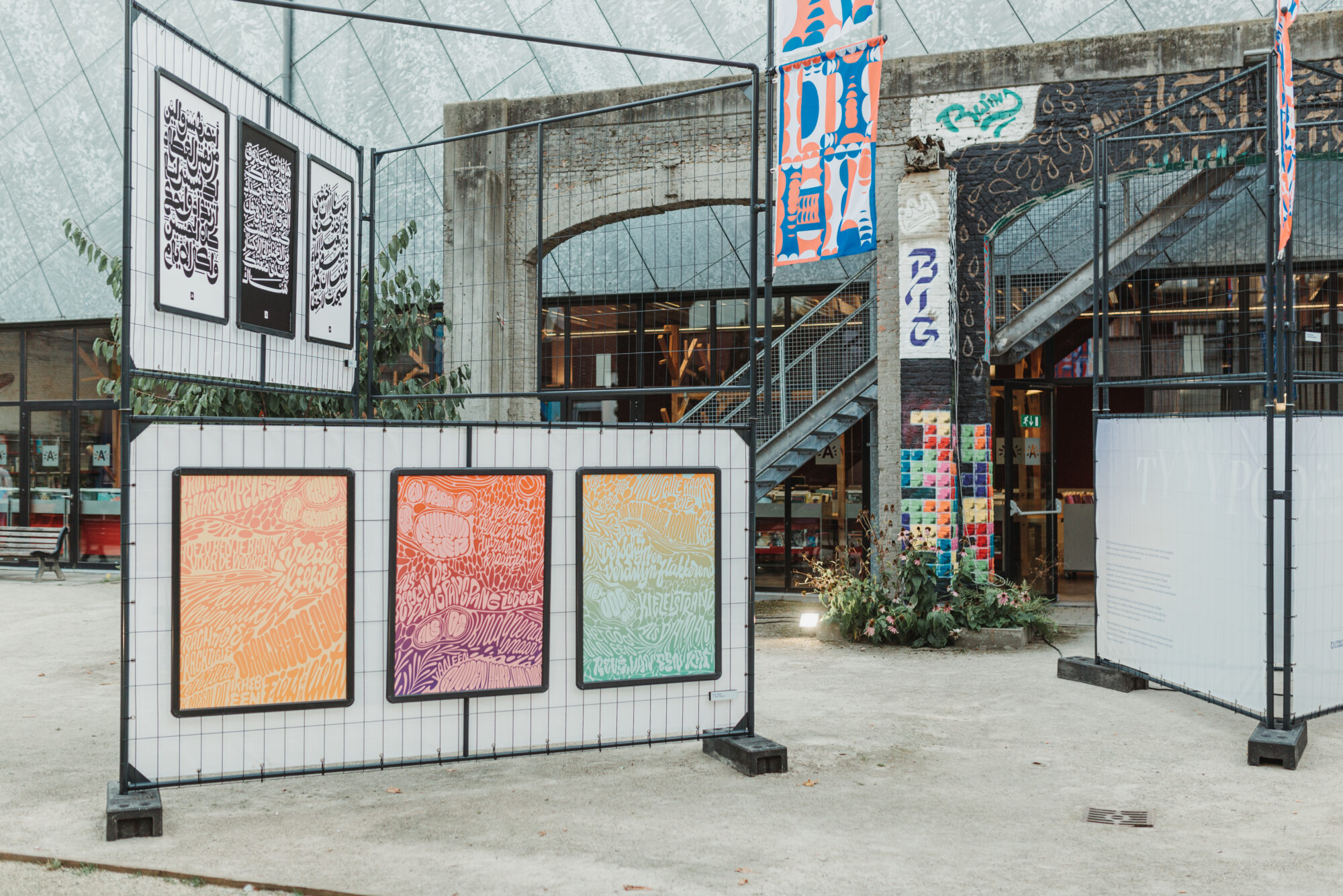 Pieter Boels (Antwerpen) – Pieter Boels is in love with language and fascinated with how design influences the meaning of words. In his work, graphic design, calligraphy, digital typography and illustrative handlettering come together. His goal is to make his audience look twice.Jasmine Roemendael (Antwerpen) – Jasmine Roemendael is born painter and better known for her artist name Pink Panther Paints. From a deep rooted background in graffiti, she immerses herself in traditional sigh painting and lettering. As a professional muralist, she transforms many a grey wall into a colourful work of art.Jelle Jespers (Antwerpen) – Within his designs, Jelle Jespers continually searches for the balance between aesthetic and technique. He’s known for his work for Dries van Noten, A.F. Vandevorst, Het Toneelhuis and Mode Museum Antwerp. For the past several years, he often works with Maud Vanhauwaert.

Kristyan Sarkis (Beiroet) – Kristyan Sarkis is a typedesigner, specialised in Arabic script. He’s the co-founder of TPTQ, an Arabic type foundry. He’s also a Typemedia teacher at KABK in the Hague. He designed this expressive typography from a despondent situation in Beirut.

Team Thursday (Rotterdam) – Loes van Esch and Simone Trum have been working as a duo since 2010. Their work is colourful, typographically driven and full of patterns that stem from the urban environment. They have a love for risoprinting and textiles, and live to mix analog and digital methods.

EXCLUSIVE RISO PRINTS
In addition to the travelling exhibition, the wordsmiths and designers also created some very cool riso prints. You can get your favourite one, or the complete set of five! Get them here. 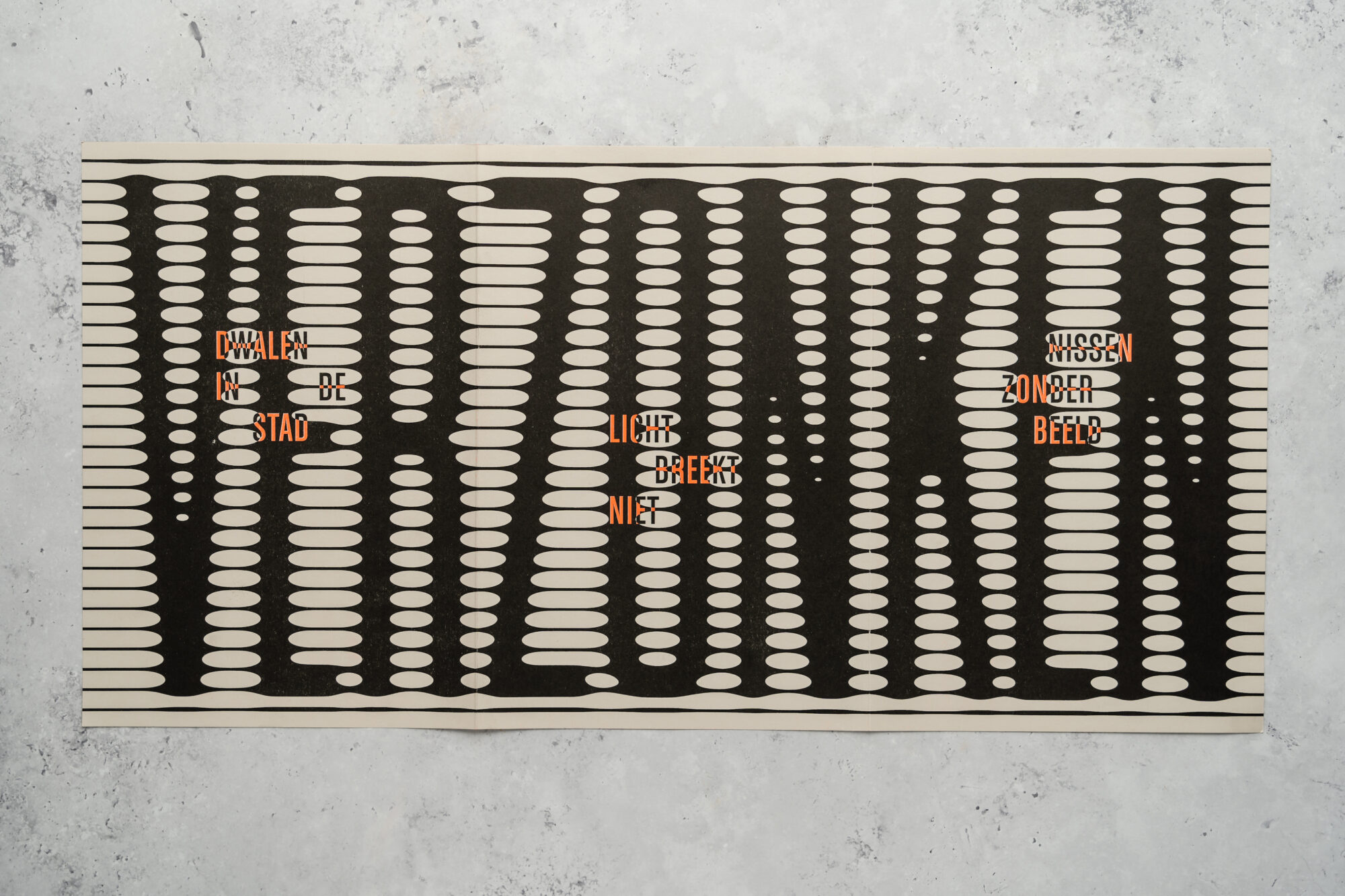 By Jelle Jespers and Maud Vanhauwaert | Photo by Rob Lipsius

TYYYPOëzie is a project by Graphic Matters and literary platform Watershed, in collaboration with deBuren.
The goal of TYYYPOëzie is to encourage collaboration and experiment among literary and graphic design professionals. And to introduce a broad audience to current, engaging language and typography.
TYYYPOëzie is made possible by: Stimuleringsfonds Creatieve Industrie, Nederlands Letterenfonds, Pictoright Fonds, Prins Bernhard Cultuurfonds, Gemeente Breda, Stichting Cultuurfonds Eindhoven and deBuren.