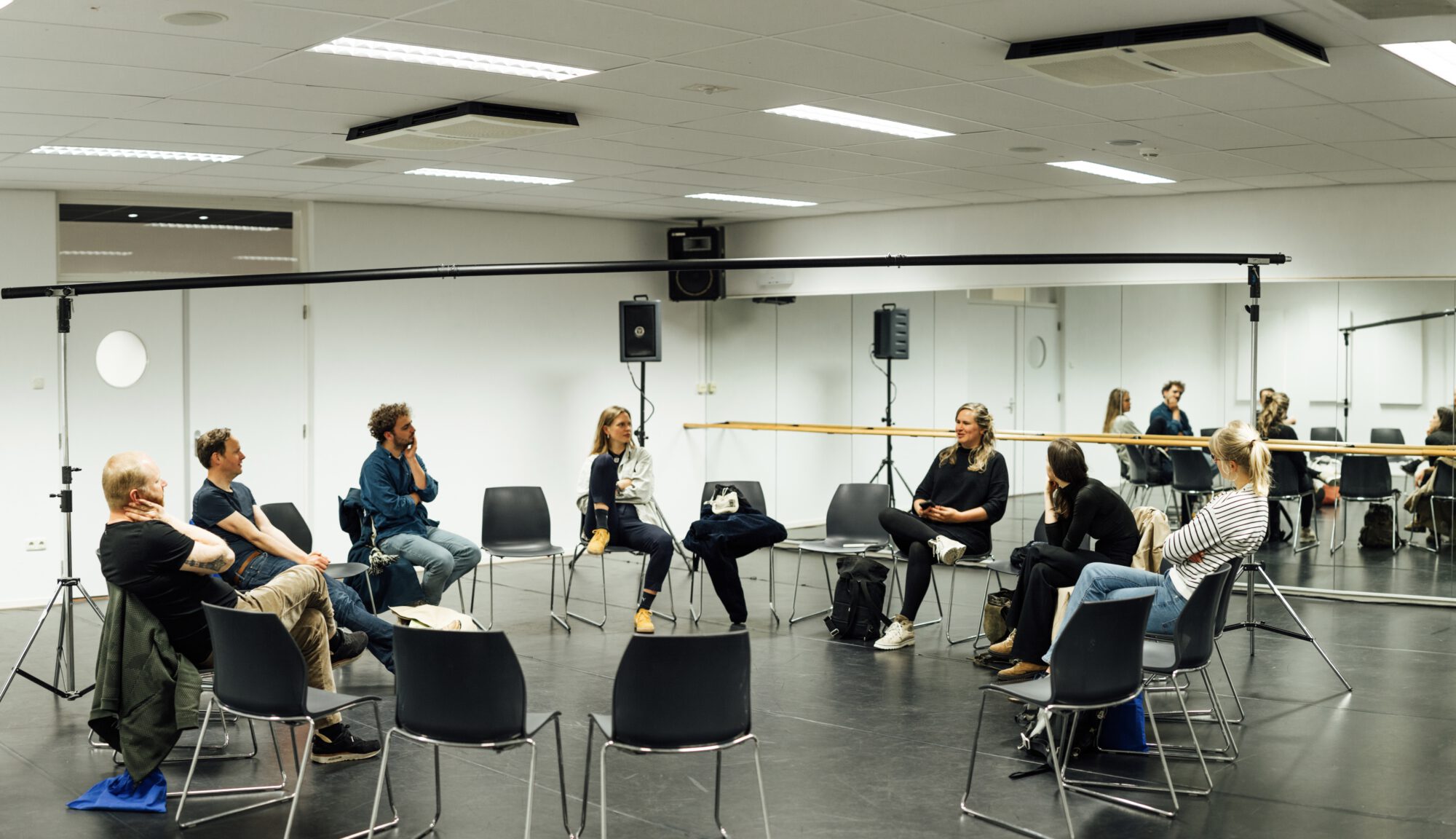 During the Moving Futures Festival, innovative dance is shown in a varied programme of performances, installations, workshops and (after)talks. From late March to early June 2022, the festival will travel through nine Dutch cities, including Breda in the Chassé Theater. Dance and illustration came together there to explore new forms of reflection on art. The illustrations are not a 1 on1 representation of the performance. The dance is the inspiration for the illustration, in which the makers  incorporate their own experience.

Dennis Elbers (Graphic Matters) explains that he is curious about the added value that designers and illustrators can have for other disciplines: “We look for this in various projects. Dance & Draw is an exploration of a possible new project in which we investigate whether art criticism can also be visual.” 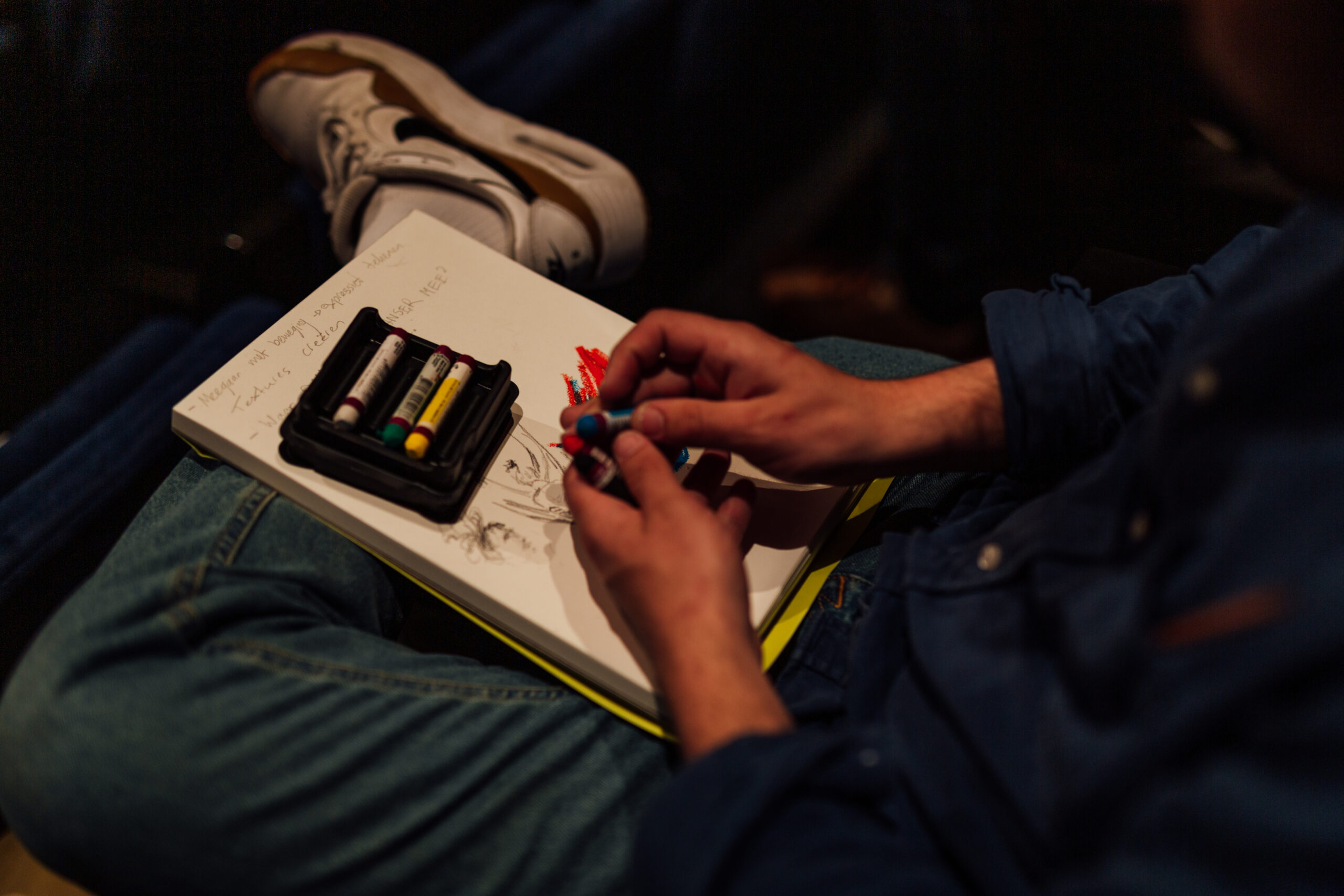 Jasmijn de Nood, Marieke Luthart and Daan van Bommel are the three participating illustrators. For them, the day started with a look around the theatre hall, where it the performances were taking place all  that evening. This was followed by a training, to get to know each other better but also to learn about the possibilities of responding to dance. During the training, the illustrators got an introduction to the world of dance and with all the obtained information, they followed up by free drawing for 15 minutes They showed the sketches to each other without judging. Dirk Verhoeven of DansBrabant and Domein voor Kunstkritiek and Anna van der Kruis of Domein voor Kunstkritiek guided the illustrators. Both Dirk and Anna take care of the Dance & Dare programme that has been running for a number of years, in which writers react to dance with essays and search for ‘new words for new dance’.

Usually dance is responded to with reviews. “It is interesting for the dancers when a review is made in a different way. People often draw what they see. But we want to know what you have experienced, what is happening in your head? At Dance & Draw, illustrators react to a form of art with their own”, says Dirk. By creating a visual essay you give something back to the dance performance, which is a lot different than a judgemental review. “Dance is a rather abstract art form, which can open all kinds of doors in your head. It makes a lot of sense to react to this with something visual”. 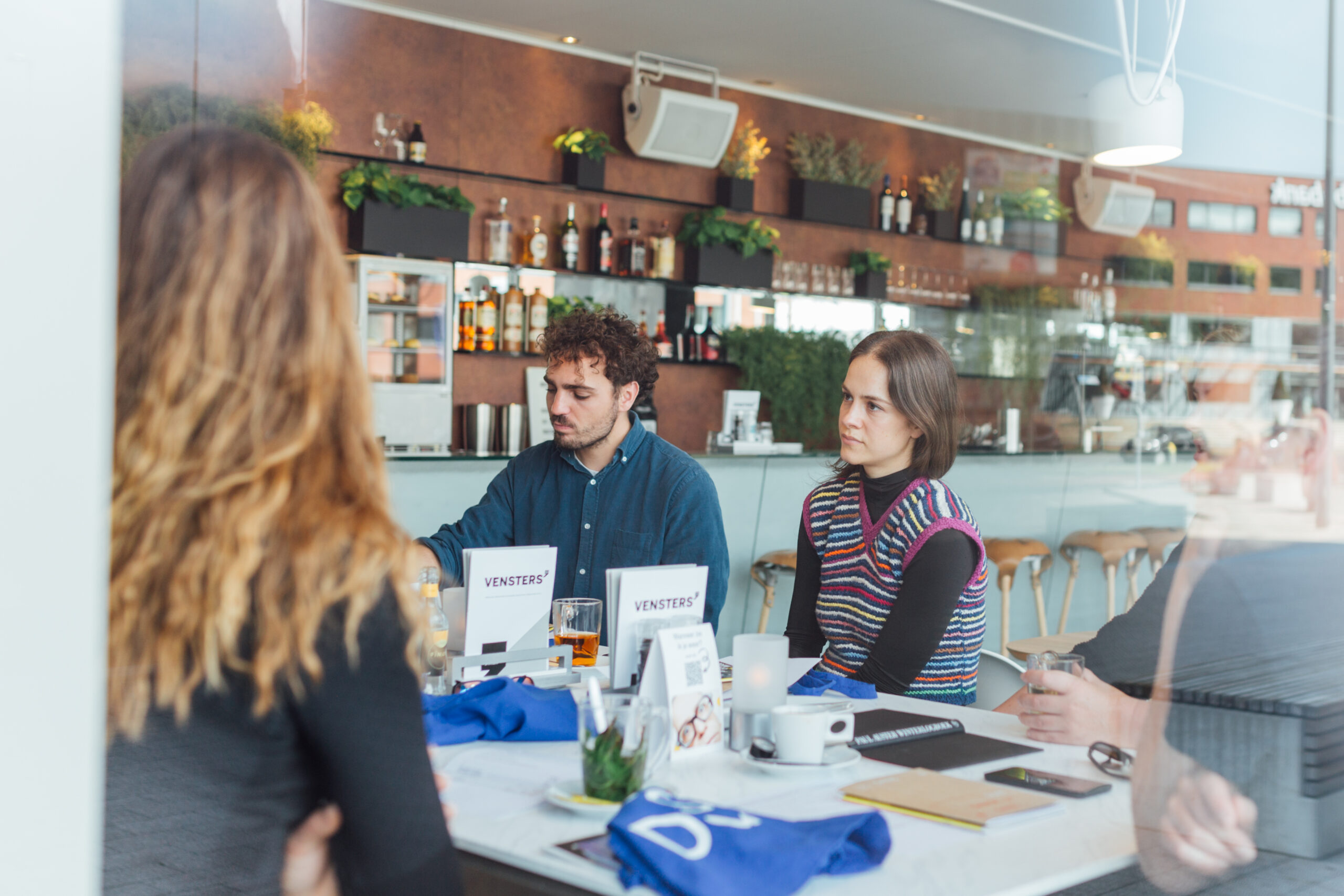 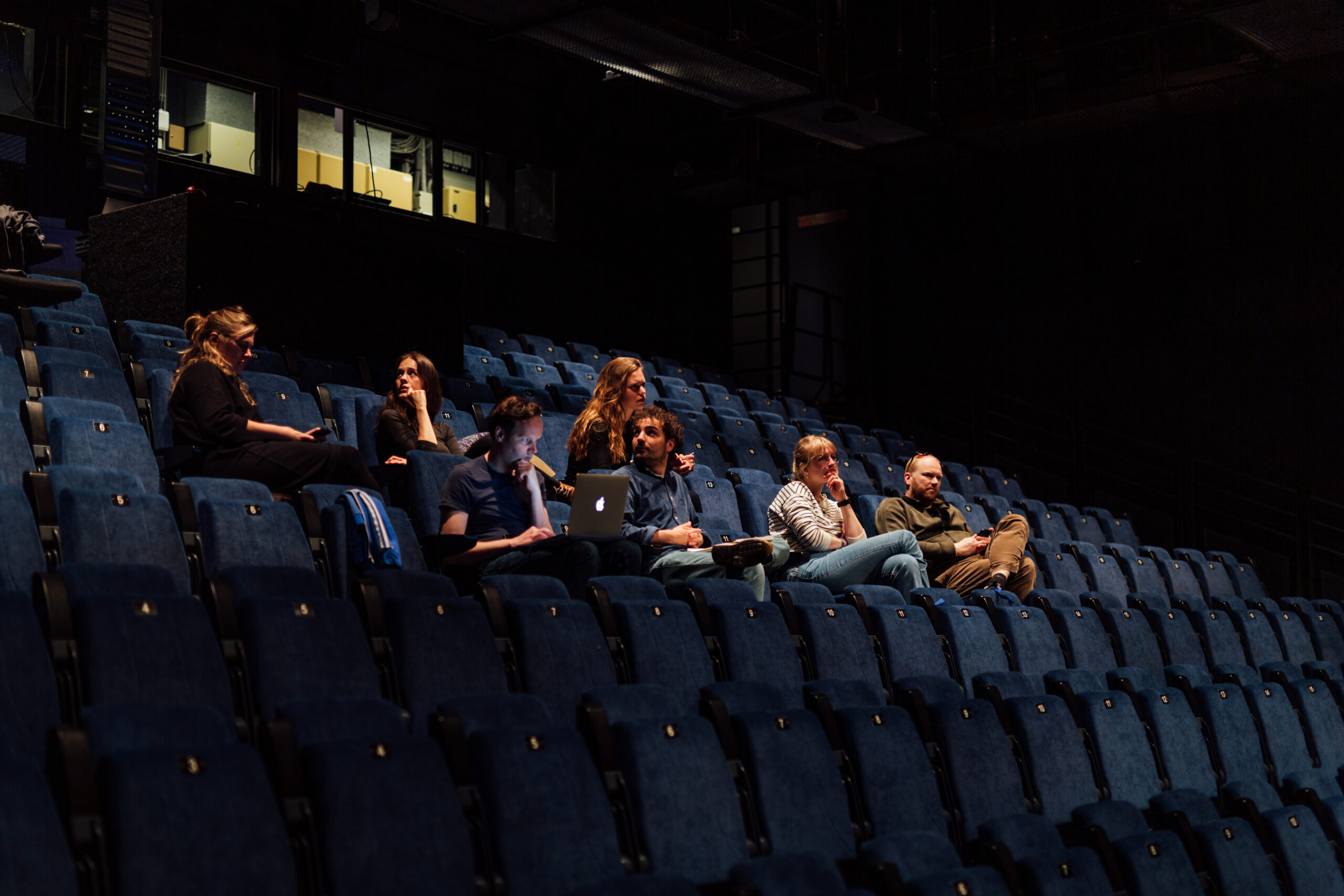 The evening featured three performances by a new generation of creators exploring the boundaries of dance. With pencil and paper, the illustrators took place in the dark theater room. In the first performance, choreographer Christian Guerematchi forms a musical trio with Mark ‘Brui5er’ Sheats and Michael Wanga, the dance deals with the violent stigma attached to black identity. Jasmijn experienced this performance as intense but very beautiful. She let the evening sink in for a few days before she started illustrating. “During the dance I wrote down what feeling it gave me and what associations I got from it. After a few days I went back to that feeling,” says Jasmijn, who was looking forward to a challenging assignment: “It was very free and it felt like everything was okay, which makes it work.” She describes her style as readable and wants to make the viewer think. Following the first show, she created three abstract drawings, one of which you see here. She also wanted to respond to the other two performances, which is what the other illustrations represent.

The illustrations can be viewed at a larger size when you open them in a new tab. 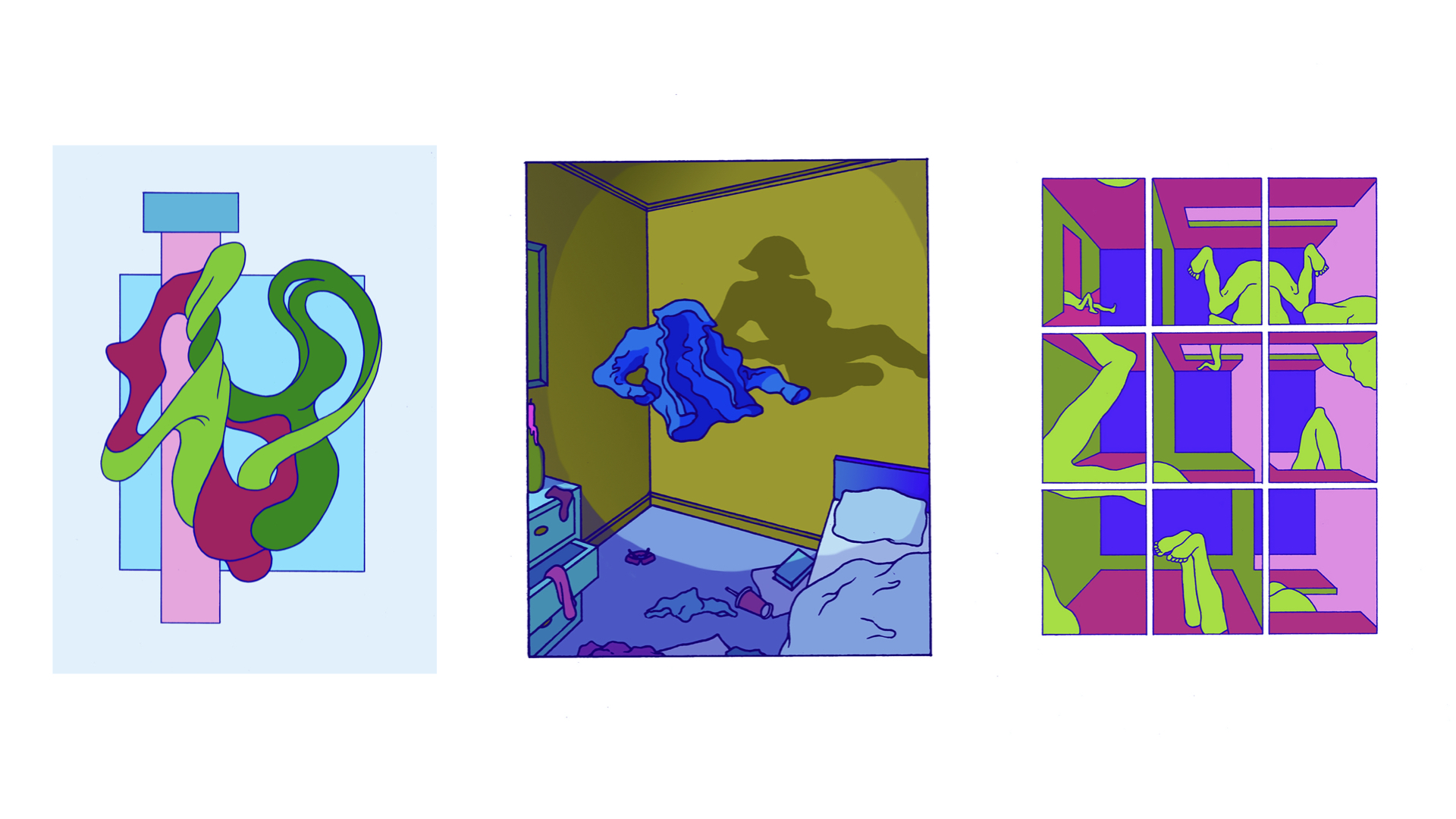 In the second performance, Antonin Rioche takes his life as a traveling dancer as the starting point, in a search for the difference between being alone and being lonely. Marieke had never been to a dance performance before so the training was a nice way for her to become familiar with it. “I usually  stay very close to reality, but now the idea was to let our imagination run wild. During the performances I was busy experiencing everything, afterwards I wrote down my feelings,” says Marieke. She describes her style as realistic with a twist. She created three illustrations, responding to all three performances; the themes are hidden within them. “I didn’t stick to my first sketch. It is important to keep sketching. The three illustrations are quite diverse, that’s how I experienced the evening itself.” 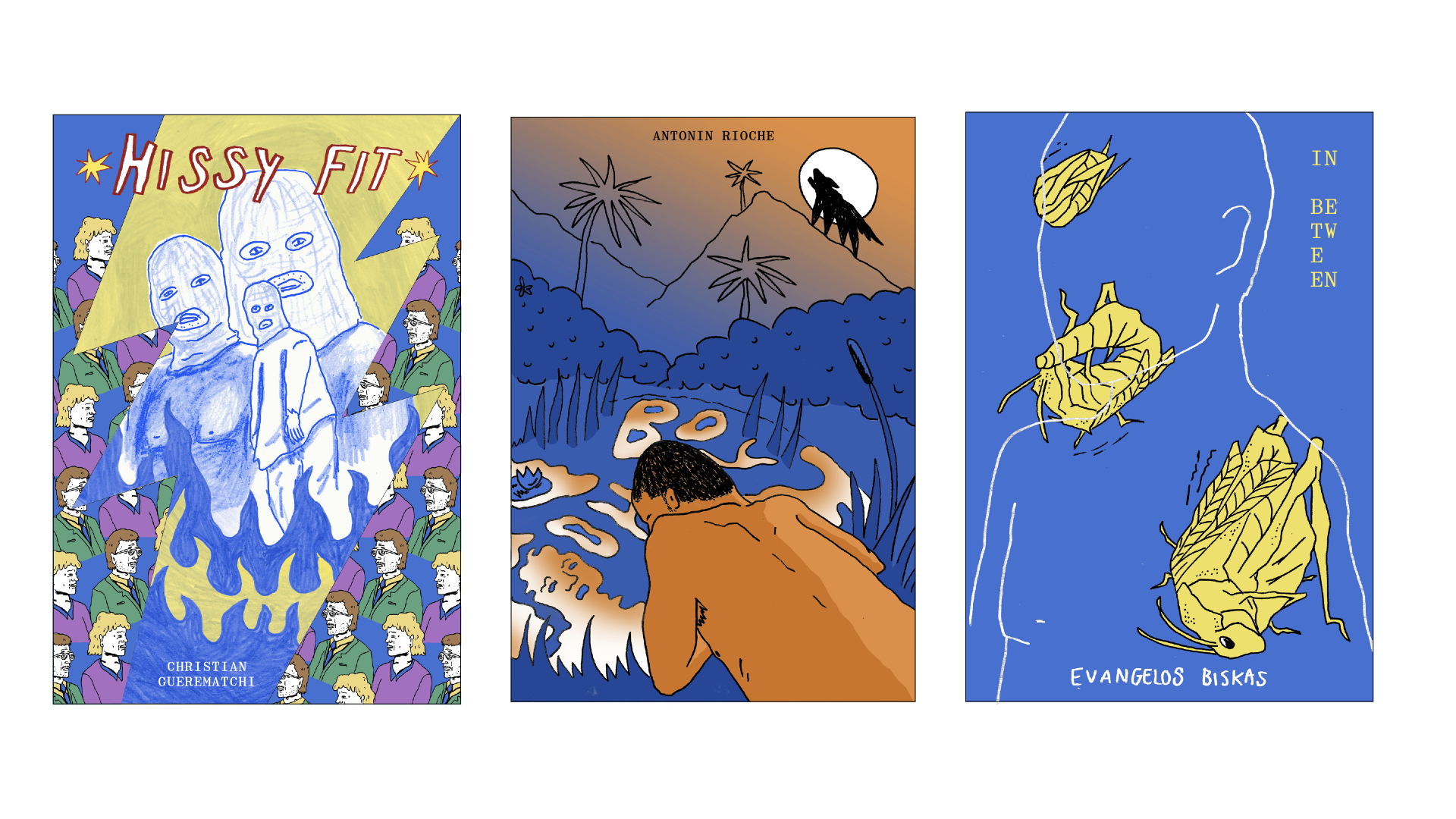 The final performance is by Greek choreographer Evangelos Biskas, who lives and works in Brabant, and mixes experimental hip-hop with contemporary dance and improvisation. This dance brought Daan back down to earth with both feet, and gave him the confidence that his work could also be happy and joyful. In his illustration he incorporated visual elements from the first performance, text from the music of the second dance and sketches from the third performance. “I had never seen before how a a story can be told through dance. With my drawings I like to deviate from reality in an absurd way. I have discovered that this can also be done with your body, if you are that good at dancing.”

As an illustrator, you are used to having a reference that you can draw in detail. “But now your reference is not stationary all the time, and that produces very distinct sketches, which are not anatomically correct at all. But if you look at what was happening on the floor and how quickly I sketched that, it very much matched my perception of how unreal it was. I used that in my final design,” says Daan. He thinks Dance & Draw is a great opportunity to discover how to use your autonomous side as a freelance illustrator. 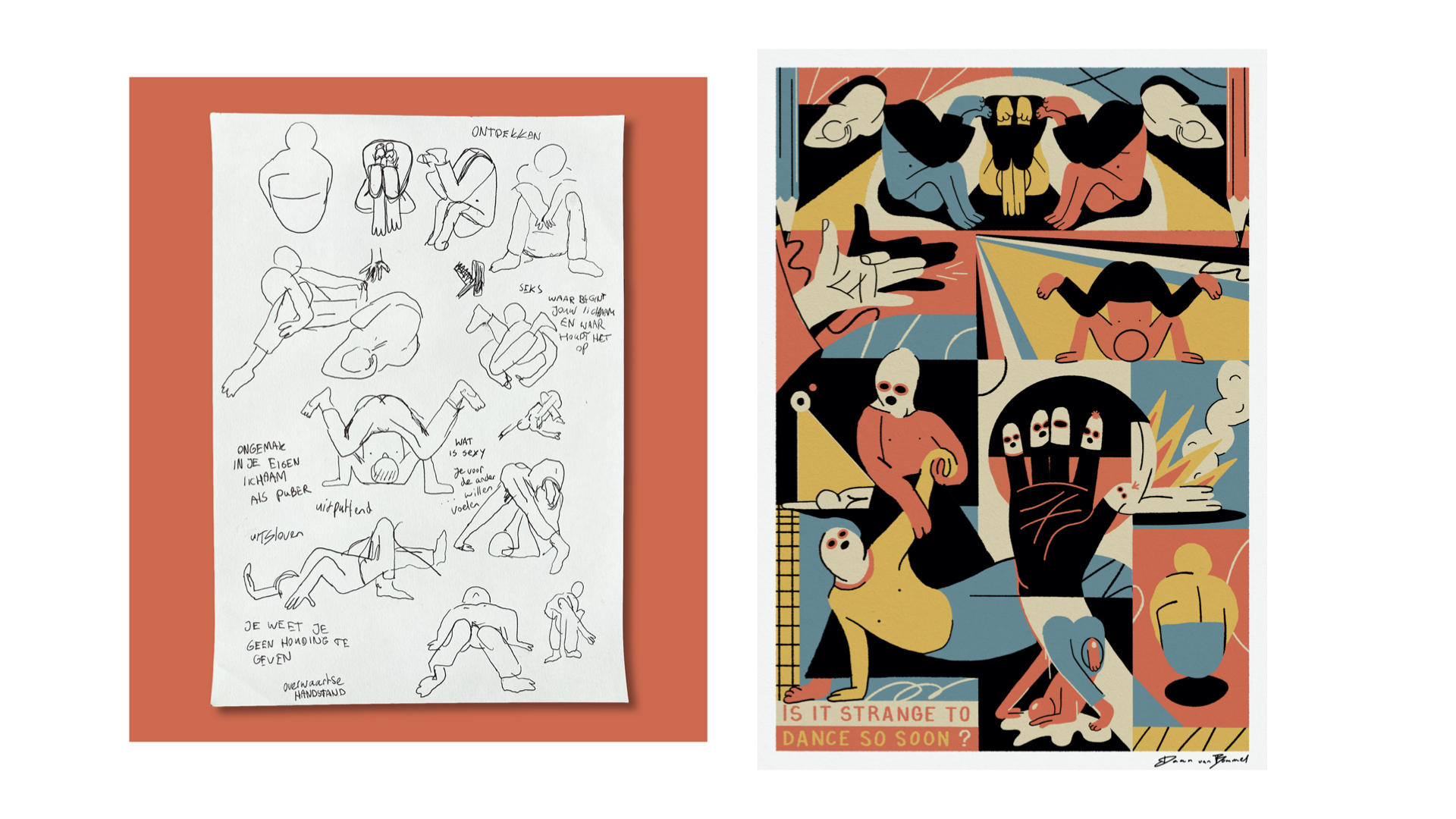 Left the sketch, right the illustration by Daan van Bommel

The Dance & Draw pilot let dance and illustration come together to form an exciting combination. The illustrators experienced it as a refreshing and enriching day. It did become clear what challenges a theatre can bring for an illustrator, according to Daan. “I had to draw completely in the dark and felt like I was disturbing people with the sounds of my pencil scratching.” A major edition of this project will likely take place in Autumn 2022. 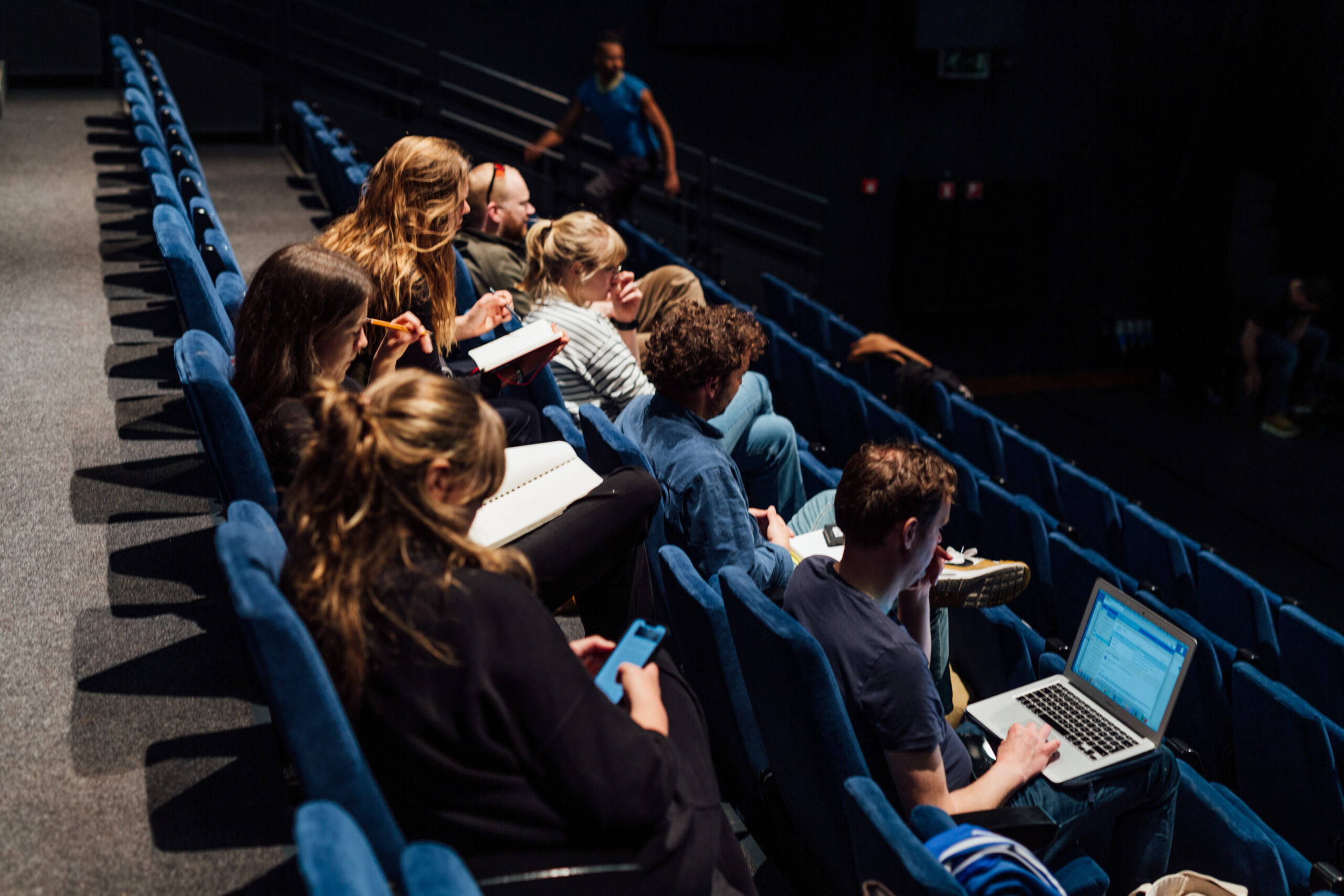